Getting freight off the roads and onto rail 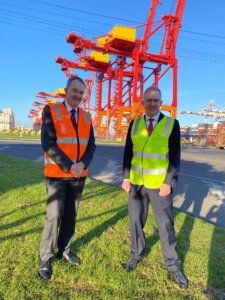 Port of Melbourne CEO, Brendan Bourke was delighted to host Minister for Communications, Urban Infrastructure, Cities and the Arts Paul Fletcher MP for a tour of the port, following the Commonwealth Government’s $2 billion budget commitment for the creation of a new intermodal terminal to accommodate future Inland Rail services.

Connection of Inland Rail to the port, including a direct freight connection to Webb Dock, is essential to meeting the long term demands of consumers and business.

Port of Melbourne backs the increased use of rail to enable the more efficient movement of goods, and is investing more than $125 million in the Port Rail Transformation Project (PRTP) as part of a suite of major initiatives to sustain the port’s standing as a world-class facility.

Port of Melbourne has been actively engaging with government on the importance of connecting Inland Rail to the port. This includes a submission to the Senate Inland Rail Inquiry and an appearance at the recent Senate hearing in support of the now announced Melbourne Intermodal Freight Terminal.

Back to all Port News