The Port of Melbourne has several projects underway, with more to come as part of our 2030 Port Development Strategy including: 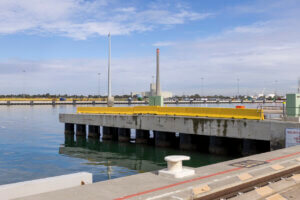 The project involves demolishing a redundant section of concrete and extending the quay line by 71 metres. The contract for the works has been awarded to Fitzgerald Constructions Australia, with completion scheduled for Q3, CY2023. Our video below explains the project. 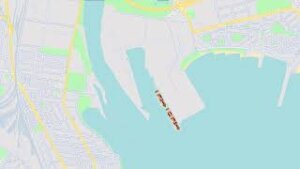 Port of Melbourne CEO Saul Cannon says the project is an important part of a 30-year investment strategy, designed to create a more efficient and productive port that helps to strengthen Victoria’s economy.

“Now more than ever, we need to make sure we get essential goods delivered to hospitals, businesses, schools and homes.

Further information on the project can be found in our media release.

The announcement was also covered by Seven News Melbourne

The project commenced in late 2021, with an official sod turn in December 2021 with Port of Melbourne CEO Saul Cannon and the Minister for Ports and Freight, the

Project construction has commenced with works planned to be complete by mid-2023.

The works at SDE Berth 1 & 2 are part of a major multi-year rehabilitation project to maintain the Swanson Dock International Container terminals to their design capacity and extend their design life. The scope of works included renewed crane rails, wharf deck, fenders and bollards.

These works commenced in 2017 and have been undertaken in close consultation with Patrick to enable the least amount of disruption to terminal operations through the multi-year project.

Works to construct a mooring dolphin were undertaken between January and March 2021. Mooring dolphins are structures that help secure vessels when berthed, providing the ability for certain vessels to overhang the berth.