The Port covers a land area of around 505 hectares, and 52km of shipping channels within Port Phillip Bay and the Yarra River. PoM is responsible for maintaining and developing these lands and waters, and overseeing the development of Port facilities and infrastructure which includes:

Our responsibilities include planning for the long-term use of Port land and shipping channels. This means making sure the Port has the capacity and capability needed to handle cargo well into the future.

Stevedore operations are undertaken by our tenants, who are not employees of Port of Melbourne.

The Port of Melbourne’s footprint does not include Station Pier, or cruise ship operations.

The VPCM’s responsibilities include the management of commercial shipping in Port Phillip, safe navigation in the port waters of the port of Melbourne, waterside emergency and marine pollution response, and the management of Station Pier as Victoria’s premier cruise shipping facility.

The critical work of the Harbour Master also resides with VPCM. More details on the VPCM can be found here. https://www.vicports.vic.gov.au

The PoM Group's objective is to deliver world class safe, responsible and reliable port facilities and services and play its part in delivering an efficient freight supply chain to support Victoria’s growing economy, including the efficient movement of goods within Melbourne and regional Victoria, together with a workable metro rail freight solution.

Working with the community

Planning for the future 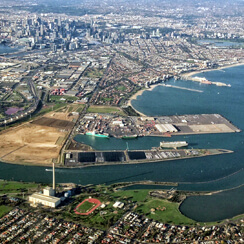