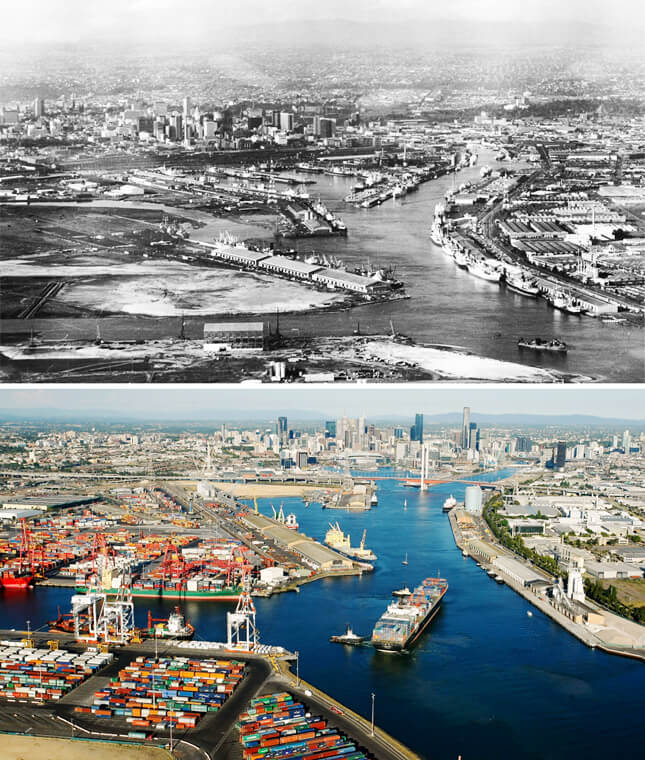 Established during the infancy of containerisation in Australia, Swanson Dock has matured over 50 years to become the centrepiece of Australia’s international container trade.

This vital piece of infrastructure transformed former marshland into a modern container terminal. The development also involved further widening and deepening of the Yarra River.

The instigator for Melbourne to build a dedicated container dock was Victor Swanson, Chairman of the Melbourne Harbor Trust, one of the predecessor organisations to Port of Melbourne Operations.

Swanson had taken a strong interest in all matters to do with international shipping and cargo and had made the decision to establish a dedicated container dock in Melbourne in 1965. In his Chairman’s Review of Operations that year, Swanson noted:

“It must be accepted, and preparations made, that ‘general cargo’ will gradually be stowed, handled, shipped and transported on land at both ends as unit cargo and containerised cargo.”

As the first vice-president of the International Association of Ports and Harbors (IAPH), Swanson had visited ports overseas and was motivated to prepare the Port of Melbourne for the newly emerging container trade.

Considered to be one of Victoria’s most brilliant engineers, Swanson had been head of the Harbor Trust for ten years and been proactive in upgrading port facilities and establishing strong ties with ports all over the world.

The official opening of Swanson Dock coincided with the 6th biennial conference of the International Association of Ports and Harbors held in Melbourne in March 1969 and was hosted by the Melbourne Harbor Trust.

On 7 March the conference guests assembled at the newly completed first operational section of the Swanson Dock container berth to witness its official opening by the Governor of Victoria, Sir Rohan Delacombe.

The first international ship to use Swanson Dock West 1 berth was the Encounter Bay – a former P&O vessel with a beam of 30.48 metres and an overall length of 227 metres. Its gross tonnage was 27,000 tons and it boasted a nominal capacity of around 1600 TEU.

It is interesting to compare this first vessel to the largest arrival at Swanson Dock to date which is the Pangal at 304 metres in length and a capacity of over 6500 TEU.

Today, Swanson Dock sits at the heart of the supply chain system for south-eastern Australia to service a new generation of customers, cargo owners, shipping lines and the wider community.